"I discovered the disease while I play with my son": the unknown universe of men with breast cancer – News 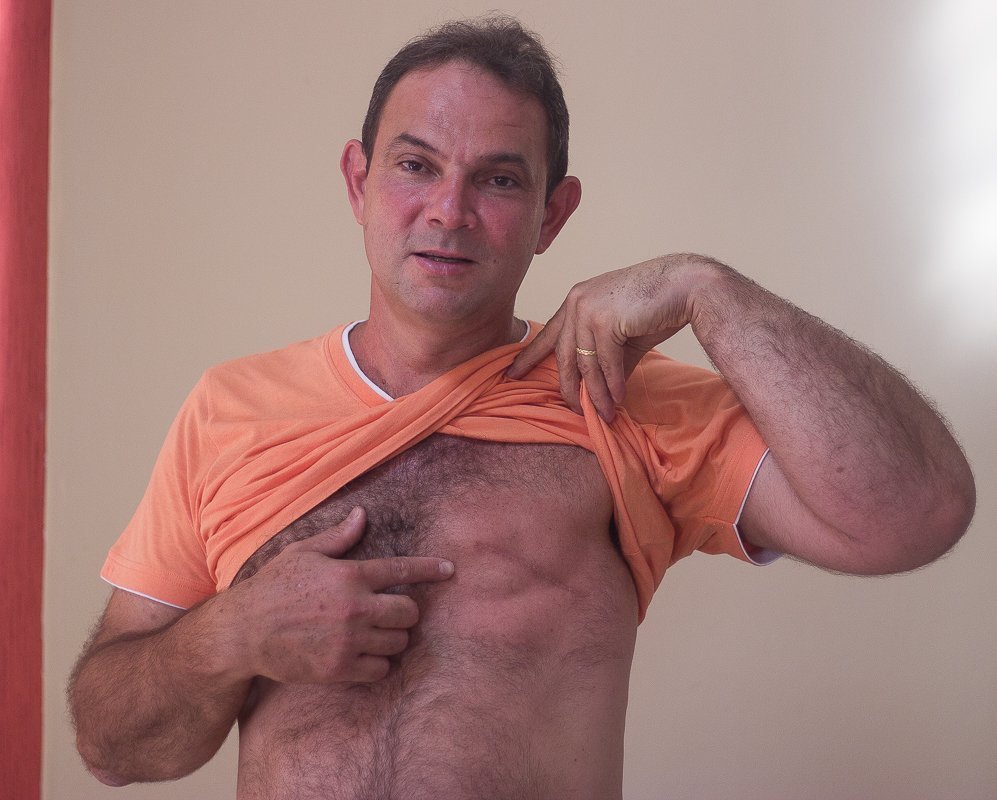 In early 2016, university professor César Pereira de Lima, 46, played with his younger son when the child leaned from his left chest. The man felt intense pain. "I've never felt this kind of thing all my life," he says.

Days later, he went to the doctor, underwent examinations, and diagnosed breast cancer.

"It was a very difficult situation for anyone to discover this disease, but it is a shock for men, but breast cancer is even more terrifying because we always think it's something far from the male audience," says the professor. .

According to the National Cancer Institute (Inca), about 1% of patients with breast cancer are men. Between the male audience, the disease is more recurrent than the age of 60 years. However, there are also archives of younger people.

According to Inca, breast cancer accounts for 28% of the new cases of cancer reported each year between men and women. In all of Brazil, this year, the estimate is that there are a total of 59.7 thousand new records of the disease.

Oncologist Laura Testa, head of the breast group at the ICESP, explains that one of the reasons why men's incidents are more unusual is because the male audience is less exposed to estrogen, female hormone .

"Most breast tumors feed on female hormones and often develop from long-term exposure to these hormones, since women start menopause until menopause, so the disease is more common after the age of 50 after menopause" , says BBC News Brazil.

Men are struck at a lesser scale than the disease because they have atrophied the breast tissue because they do not take the same actions of female hormones as women. "They have a much smaller mammary gland and therefore do not have the same stimulus as women's hormones throughout their lives."

A university professor, Lima, lived a life he considered common. A resident of Cuiabá (MT) taught management at three tertiary institutions in the capital of Mato Grosso. Married 22 years old and father of two children, one with seven and one with 14 years old, separated the routine between work and family.

It was the night of February 27, 2016. Lima played "fight" with his younger son when the child struck his father's left chest. "He gave a playful hit, very light, but it hurt much more than I could imagine. It was a very terrible pain," he remembers.

The situation reminded Lima of a fact she had observed days before: her left teat had withdrawn without obvious reason. "I did not pay much attention to this, but when I felt this pain, I realized it could be something more serious."

The withdrawal of the nipple is indicated by experts as a symptom of a possible breast cancer. Other features that may also indicate signs of disease among men are changes such as swelling in the area of ​​the breast or in the lower part of the body, wrinkled skin or redness in the chest.

According to Laura Testa, in any case where a person understands a difference in the chest, it is fundamental to seek medical help. "It is very important to learn the source of this change," he explains. The oncologist stresses that early diagnosis brings more chances of good treatment results.

"If there is something different in the breast area, it needs to be explored." It can be a hormonal dysfunction, but it can also be some illness. this makes treatment more difficult because the disease is more advanced, "Laura says.

Mário Sérgio Amaral Campos, a specialist in breast disease diagnosis, notes that the overwhelming majority of the symptoms of a possible breast cancer are not related to the disease.

"Many cases of gynecomastia (excessive enlargement of the mammary glands of men), which occur mainly during puberty or when the male is in the andropause, because they are phases of hormonal accumulation, in which case it is not malignant, but it affects unpleasant aesthetics, especially for the younger ones, "he says.

The day after the severe pain on her left chest, Lima had scheduled an appointment with a mamologist. "I was able to take care of a week later, through the health plan, if it were for the Unified Health System, it would take six months," he says.

The professor did tests to prove that the tip on his left chest was malignant. The core was 0.4 centimeters and was to become the second stage. "The disease has four stages, and most find it in the third or fourth when it has already spread to other organs and there is nothing to do," Lima says.

For him, cancer has evolved because of the anxiety he faced in his career in teaching. "I had to have 2,000 students and I taught from morning until night, so that was very tiring," he says. The doctors who followed him, however, explained to the patient that the disease was more likely to have been developed for genetic reasons.

Laura Testa points out that many of the cancer cases are related to genetics.

"The disease can be genetic or hereditary when several people in the family have tumors. This causes the gene to be transmitted to the child, who is likely to develop cancer," he explains.

According to physician Mário Sérgio Amaral, men's disease can also occur due to hormonal dysfunction. "In this case, it may be related to conditions like obesity or habits such as anabolic or cigarette smoking, among others."

In April 2016, one month after the discovery of the disease, the professor underwent surgery for complete removal of the left breast and a part of the armpit. At that time, the nodule had grown to 0.6 centimeters.

"It was a surgical procedure similar to what women did with the disease." An area of ​​the armpit area was also removed because there were indications that cancer could get under hand, "the professor explains.

After surgery, Lima underwent 18 chemotherapy sessions from June to December 2016 and 25 radiotherapy procedures from December of the same year to February 2017. She then used hormonal blockers for one year.

"The majority of breast tumors in the male audience also feeds the female hormone found in humans, and the production of male hormone itself can turn into female hormone, so hormone binding is one of the most commonly used treatments for breast cancer of men, "explains Laura Testa.

All the treatment given to men with breast cancer is similar to that offered to the woman. "The difference is that the emotional impact of a man's surgery is different from what the woman suffers when she loses her chest," says the oncologist.

Since the discovery of the disease, Lima has received support from her wife and children.

For him, the help of family and friends was fundamental. "I have no doubt that they helped me a lot," he says. Initially, his companion was extremely shaken by the discovery of his wife's illness. "But today we have overcome this difficulty. Before, he thought it was a diagnosis of death," recalls the professor.

In the elder son, he said about the disease. "She understands well and has a great deal of concern for me," he says. For the younger, he said he had a "bug" on his chest. "The two of us were accompanying me to many chemotherapy sessions, and that was very important to me."

In addition to treatment in a private hospital in Cuiabá, Lima often traveled to Sao Paulo for consultations with breast cancer specialists. In the capital of São Paulo met with other men who also face the illness.

"In Sao Paulo, I know several cases of men who have the same illness because it is a city that is a reference to cure," he explains.

Among the colleagues he met, some were good, but there were others who discovered the disease late. "One of them was in a terminal state, I met another who died in a short time."

According to Mário Sérgio Amaral, men usually find breast cancer when they are at an advanced stage, because they are slowly suspected of the disease. "There is no evidence of preventative mammography, as is the case with women who take the test only when they see a change, but when they are at this stage, it is because cancer has reached a larger size and has time to develop, says.

At the end of the chemotherapy sessions in December 2016, Lima underwent examinations that detected spotting in the lungs. After evaluations, doctors found that it was a metastasis of breast cancer, that is, the disease had spread to his lungs.

"It was hard to get these news, but I still count on the support of my family and friends."

In early 2017, when treatment for the disease was stopped on the breast, chemotherapy was started against lung cancer, diagnosed at an early stage. Because these are metastases, cases considered to be more difficult to eliminate the disease, the teacher has to do chemotherapy for life. "Since then, I have a session every month," he says.

The professor also monitors continuously to see if the disease has progressed to other organs. "I know I have to watch and heal life, so I do not think I can ever believe I'm totally cured."

The scar on the chest

Lima carries a scar on the left chest because of the surgery to remove the breast. Brand is not a problem for him. "It's a sign that I have overcome the disease in places," he says. He says he does not see any obstacle to get out of his shirt. "If they ask me about the scar, I tell them about the disease and tell them how I won this fight."

Watching the Church of the Baptists, the professor believes that faith was critical to success in treating cancer. "Regardless of religion, when people have faith, things get better and are more likely to get what they want," he says.

Two months ago he left medical advice. Previously, Lima was absent from work only in the final phase of chemotherapy against breast cancer. "In August, doctors advised me to move away from work because of the stress caused by the service," he says.

In two years, Lima plans to retire for the duration of the service. Even away from the classrooms, the teacher keeps in touch with many of his students.

"They always ask me how I am, some come home to see me, I have a good relationship with them," he prides himself.

In recent months, the professor has been trying to help people with cancer through lectures in some parts of Mato Grosso, as in the baptismal churches. He also plans to use his management skills to help small entrepreneurs.

"I'm going to touch life normally, feel emotionally and spiritually cured. Of course, I have to make lifelong treatment, but I think the hardest I've achieved, which is emotional and spiritual healing. "