Formal: Small is officially returned to Cologne to help the old team return to the Bundesliga team 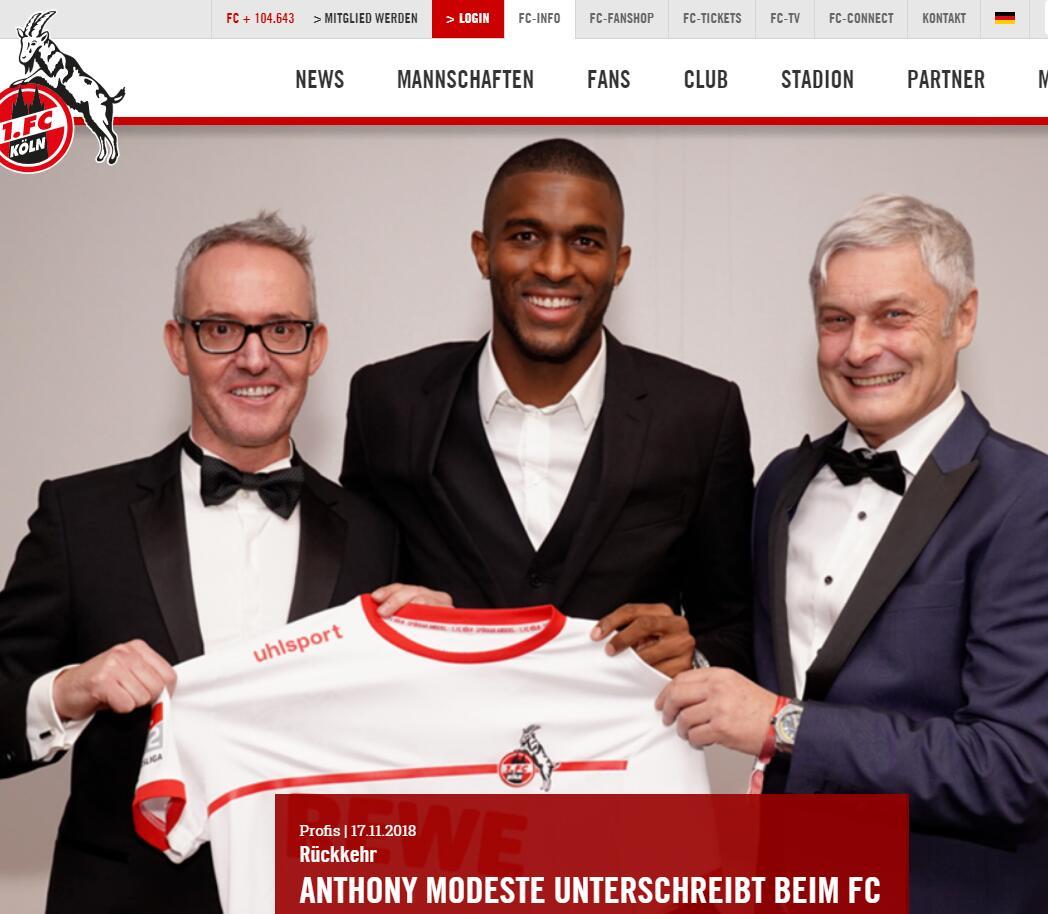 In the morning of November 18, Beijing time, official news from the official website of the German club Becker Cologne, the French striker Modested has officially signed a contract with the club until 30 June 2023.

It is reported that Cologne's chairman, Werner Spinner, has announced this good news in celebration of the 70th anniversary of the club. Formally announced that the club has signed a contract with free agent Modeste and the contract expires in the summer of 2023. Previously, Modest had training with Cologne U21 to maintain his status, and is ready to play for the team.

Cologne sports manager Amin Fei said: "We have been in close contact with Tony (Mundest) for the past few weeks. When we realized that we had the opportunity to solve his contract and let him stay for a long time, we did everything. He can work hard in this direction, I want to thank Mr Spiniel very much and he has brought a decisive star to the group. "Amin Fei also stressed that" Tony knows the group very well, that's for Cologne. The city is also very familiar with the man knows he is not here as a savior, he has strong power but is still only a member of the team.

To return to his old club, Modest also expressed his enthusiasm: "I am very happy to return to the club as my home, see the wonderful future of the Cologne club and let us go together. I am very grateful and very lucky, since after my return from China, Cologne helped me a lot, I hope to return this support and trust, to help Cologne achieve as much as possible, I can not wait to wear the shirt of Cologne ".

Modest is 30 and played in Cologne for two seasons, scored 45 goals in 73 appearances and won the Bundesliga balls. In 2017, after renting Cologne and purchasing the right to buy, Quan Jian first paid a 5.7 million-euro loan and then paid a redemption fee of 29 million euros. During his tenure, Duddy scored 16 goals in 29 appearances. After the World Cup this summer, he refused to return to Tianjin due to contract problems. After that, Modested was training with the Cologne youth team, he also had an anecdote with the Schalke 04 and Stuttgart bundesliga teams, but it seems he could not sign the contract because of the Quanjian contract. However, according to the news of the Transmission Market, in fact, Modest has regained his free body in August and can negotiate contracts with any group. In the end, he entered the old Cologne club as he wanted.

Cologne is second in the German Bundesliga and hopes to enter the Bundesliga next season. German Hector is still in the team, which is a guarantee for the team's performance. Today, Modest joined the goat (Cologne's nickname), which is undoubtedly another important advantage of the team's return to the Bundesliga.

Disclaimer: This article represents only the author himself, Sohu is the information publishing platform and Sohu only provides information storage services.