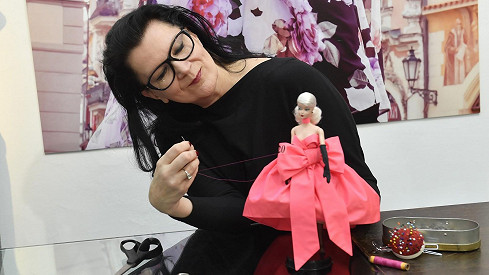 Tany has given her good talent and the result is an original pink taffeta dress for a doll by her crew. She, along with other creative creations, will be auctioned and will help children in need. During the gallery, the auction will take place and the proceeds will be made available to the Fund for Endangered Children, ie Klokánka Láskova in Prague. "This year, part of the proceeds will be used specifically to support Anna Spilglowova's dynamics. The funds raised by the auction will also be used to equip shelters," says project editor Frantisek Andel.

"I chose this project because I was very interested in making money to help children without families I remembered my childhood I had a very similar Barbie doll so I would love it very much that this doll that I dressed helped good things, "he says.

In her words, a real woman could dress a luxurious doll robe, although Barbie's stitching was much easier. "I used the stitch pattern on the doll and enjoyed the speed with which we dressed, it's not that fast," she explains, only the stitches for the dolls decided on her future profession. "I found the passion for designing with these dolls . I liked to dress them and make other clothes than what they wore, "he remembered.

In addition to Taťána Kováříková, Alice Abraham will also contribute to her auction, which has created a doll that incorporates the essence of femininity. Beata Rajska (55) joined the auction this year and created a femme fatale doll with a black dress and colored souls. Monika Drápalová created a beauty that intensifies tenderness and femininity. Klára Nademlýnská designed the doll exactly in the style of her models and the silk robe adorned the stars. Their model also prepared brothers for Poner and many other designers.

The children also decided to help other personalities. Patrons of the event are actors Jitka Sedláčková, Vanda Hybnerová, Kaira Hrachovcová and Dáša Zázvůrková. The evening will be traditionally preserved by Kristina Kloubková and František Anděl. The project will also be supported by Sara Sandeva, Iveta Vítová, Marcela Březinová and writer Sylva Lauerová. ■