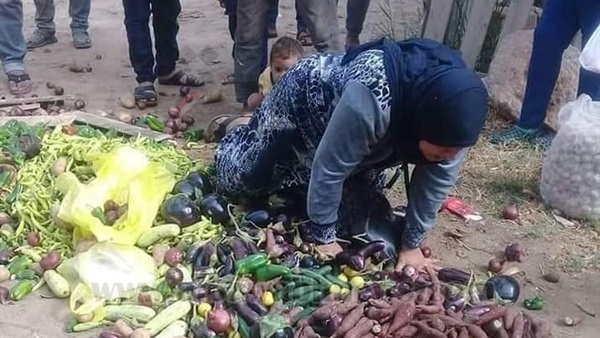 The inhabitants of Ras al-Bar, in particular, and the inhabitants of Damietta were generally in a state of rage because of a campaign to abolish the professions and facilities carried out by the Ras al-Bar local unit in Damietta on the 63rd Street where the campaign removed the the lady's position to sell the vegetables and destroy the goods that belong to the street.
The leaders of the social networking sites depicted the lady and expressed their wrath for the destruction of the lady's "mattress" and demanded action against those in the campaign.
For her part, Dr Manal Awad Mikheil, Damietta's commander, objected to the campaign, where she decided to refer employees who were responsible for having hit the vegetable salesman in the Ras al-Bar public market for research. And he will finish his job without exposure or damage to one of the vendors or parents and that the incident has happened and will be resolved.
"We live in the sale of vegetables and we have no alternative," said Ramadan Mohamed, wife of the lady, who was sent by General Tariq Mujahid, Damietta's Safety Director, to improve the psychological impact of behavior in the lady's heart.
The husband's husband denied that the police officers attacked him, explaining that he was asking the head of the local unit not to remove the mattress but attacked him with his foot and asked the police to put me in the police car and hold me back.
He added that General Brigadier Mohamed Heikal, Head of Police at Damietta Security Directorate, came to us to provide any help from the representative of General Tareq Mujahid, Security Director to Damietta, to correct the image of the attacking police officers to my husband.
He added that he did not agree to use his wife's image to distort our country and added that many entrepreneurs and public people have continued with us to help and repair any psychological or material loss by saying that we only live in halal and we do not want others.
In a related context, several entrepreneurs decided to help Mrs Damietta, where they decided to give the lady two vegetables cars, while others provided funds to help and provide a seat for the sale of vegetables.