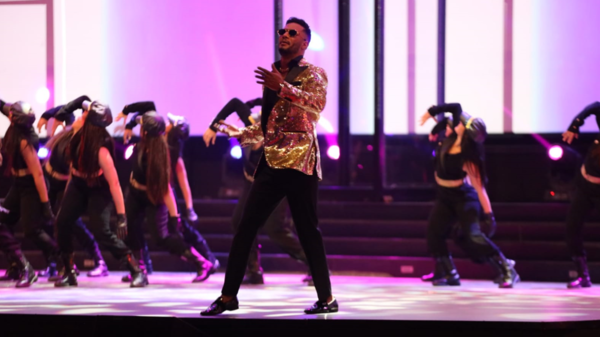 A stormy day passed by the Egyptian city of El Gouna after the flames intensified and the flames burned a large part of the theater, which was set to receive the opening activities of the film festival, but the issue turned upside down the next day.

Yesterday, Thursday evening, the activities of the fifth session of the festival began, as if nothing had happened, without any trace of fire.

At first, many stars flocked to the red carpet to show off their elegant looks. This time, the controversy and scandal belonged to the artist Najla Badr, who chose the “fiery” dress!

However, despite the presence of many art stars, Mohammad Ramazan managed to escape the spotlight again from the first moment of his appearance, after getting into the car in which he wrote the famous sentence “Number One”.

As for Samih Sawiris, the founder of El Gouna, in his speech, he said that he was proud of all the employees who accompanied him in the company and their efforts to repair all the losses in the last 24 hours. fire

It is noteworthy that in this year’s session, the honored star is the artist Ahmed El Sakka, who was presented to honor him by Hend Sabry.

After taking the stage, he chose to dedicate this honor to many people, especially his wife and two late Samir Ghanem and Dalal Abdel Aziz.

“Samoura .. the king of comedy”

In addition, the festival decided to celebrate those who left our world this year, as it presented a special segment that spoke about the value of art, while displaying pictures of those behind the artist Sayed Raqab.

Although Samir Ghanem and Dalal Abdel Aziz were not in their bodies, they joined their art and the festival celebrated them a lot, where Ghanem had a special share.

He presented a panel entitled “Samoura .. The King of Comedy”, which tells about some of the works that the audience knows by heart.

As for the painful moments during this art event, the artist Lebleba, who took the stage to honor Ghanem, fell, then touched and cried, but fell on the stairs as he left to leave.

Samih Sawiris will be on a date with another art event in El Gouna as he wants to remember a promise he made years ago when he confirmed he would hold a music festival.

He promised that the issue would be resolved as soon as possible, given his commitment to the Minister of Culture, but Corona pointed out that it could be done after the virus crisis is over.

After the official celebrations, another ceremony was held in which Mohammad Ramazan performed many songs and dances and all the participants interacted.