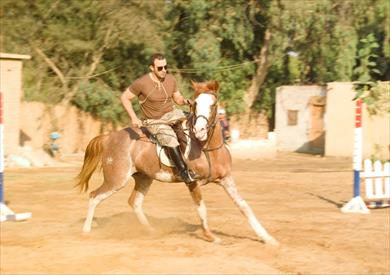 The artist Ahmed El Sakka, a new video by him, is doing his hobby in horse riding.

"Sakka" appeared in the yard dancing with his white horse in the melodies of the melody of the local melody, amid much encouragement and commented "Sakka" on the video through his account at "Instagram" saying: "In the name of God ".

Al-Sakka knows that horses are his first love, he has an authentic Arab horse racing farm in Nazlat al-Samman and sees it as his real treasure. Saqqa "on more than one riding project including the film" Forced Escape, Shorts and Vanilla and Cap ".