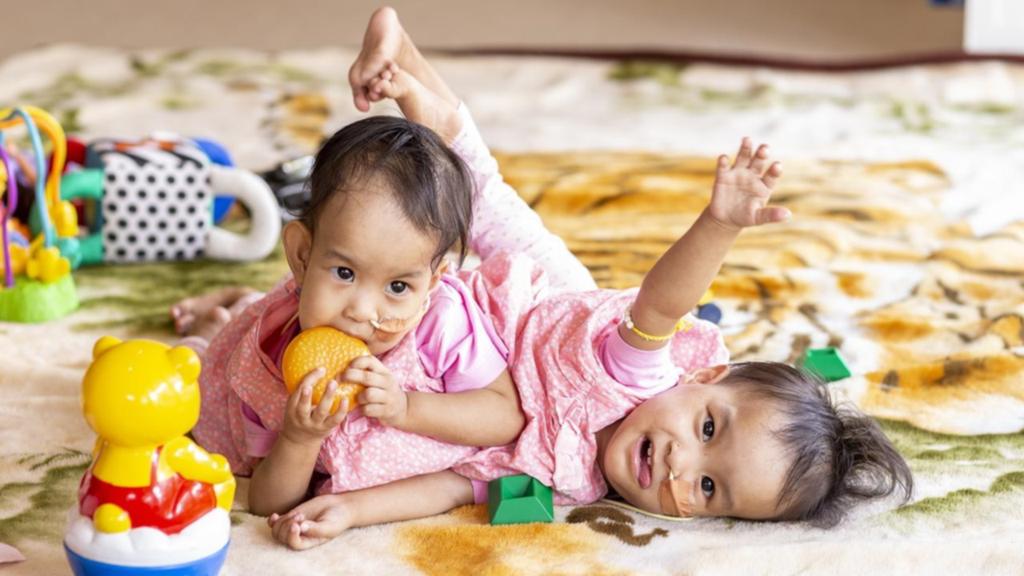 Surgeons have spoken for their joy after the successful separation of coupled twins Bhutanese Nima and Dawa to Melbourne.

A group of medical experts emerged from the theater on Friday afternoon after the six-hour process that proudly stated that girls aged 15 months are no longer associated.

The sisters, who unite the trunk and share a liver, recover and breathe independently after the surgery, which included up to 25 surgeons, nurses and anesthetists.

The pictures shared by the Royal Children's Hospital show girls in separate beds for the first time in their short life.

Head of Pediatric Surgery Dr. Joe Crameri, who was the head of the company, said there were no surprises, despite fears that the girls' bowel was common.

"We were very lucky because there was no significant accumulation of intestines and while swimming next to each other, it is not materially linked in any significant way," Dr Crameri told reporters.

"And really the main challenge today, as we thought, was to get the belly rebuilt and both areas shut."

Mother Bhumchu Zangmo, who carried Nima and Drava to Australia in October, is said to be very relieved after saying that girls are likely to have a "good effect."

"It's a relief and it's also fine," said Dr. Crameri after the surgery.

"There is nothing better than any act than to go to the parents and say that we are able to take care of your child, we are able to do what we wanted to do and that we feel you will be able to recover from it and proceed. "

We hope that girls should not spend time in ICU but they will be monitored closely for the next 24 to 48 hours and are expected to stay in the hospital for about a week.

Nimah and Dauah are leaving the first institution's child at Kilmore since they come to Australia.

Their operation was previously postponed after last minute checks revealed that the sisters were not ready, giving them more time to gain weight and become stronger.

"We could see today the value of the girls who are at that time with the children first and strengthen their strength and I think they will help them significantly in their recovery," said Dr. Crameri.

The process and recovery are expected to cost at least $ 350,000 and the state government has offered to pay the bill.

Other funds that will be gathered will go towards rehabilitation of the twins and their return home.