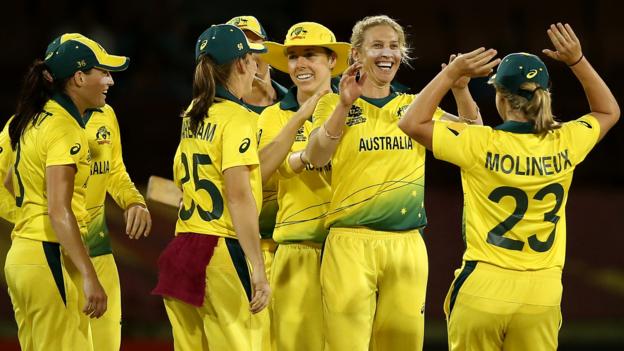 Favorites Australia kicked off the World Women Twenty20 campaign with 52 victories over Pakistan in Guyana.

The first place in the world made 165-5, with three players going through 40 and Pakistan not challenging with 113-8.

India, however, to reach the final of the World T20, won New Zealand with 34 runs after 194-5, with captain Harmanpreet Kaur knocking eight six in 103.

Hosts and champions of West Indian champions take the Asian Cup winners in Bangladesh in the last Friday match.

The Wicketkeeper and match player Alyssa Healy gave Australia some early impetus after they chose to win and helped them fifty without losses after just 34 balls.

After Healy was arrested for 48th attack in the eighth place to leave the Australians at 72-1, Pakistan began to limit the score and achieved almost five overs without borders.

Open-ended partner Beth Mooney also made 48 and Governor Meg Lanning threw six out of 41 before he was one of two wickets to fall into the final.

Pakistan had lost three wickets until the end of the power and teenage football Georgia Wareham then hit twice on the 12th over, both were well placed by Healy on the tips.

In the open match of the tournament, also in group B and played in the same wicket, it was a good start from India, which lost the Asia Cup crown for the first time in June when it was hit in the final from Bangladesh, the first six editions of the event.

The tournament consists of two groups of five, with the first two forming the semi-finalists.

England, which won the opening match in 2009, is in Group A and starts Saturday against Sri Lanka.