the mobilization continues in Gironde this Sunday 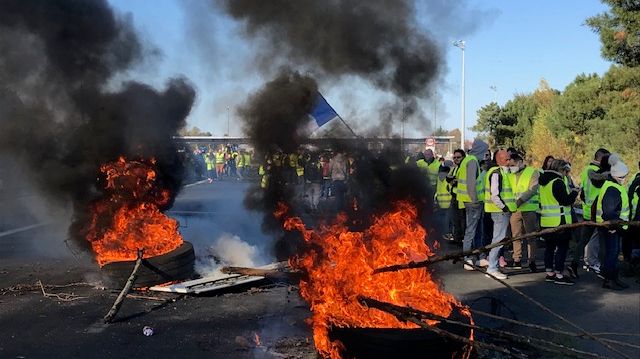 The movement was going to last one day. It has kept all weekend and, in some areas, could be extended this Monday. If all the department is concerned about blocking or filter barriers, there were three particularly sensitive points.

The Cat and Mouse game on the A63

For more than 30 hours, yellow vests block the A63 in Canéjan, south of Bordeaux. On Saturday, they alternated between snail operation and total blocking, in both directions of traffic. About fifty protesters then went to the night there, then joined with other protesters. From 8 in the evening on Sunday, yellow vests alternate between the total block and the filter barrier. At noon, gathered at the general assembly in the middle of the street, the protesters decided to continue the mobilization all day. And he soon decided to split into two teams to capture the slopes in both directions. The CRS also reached the stage. After ten minutes of negotiations, the yellow vests increased their barrier to be found in the Géant Casino de Pessac parking area. Before deciding on a new snail operation and blocking the motorway again in the direction of Bordeaux – Bayonne in Canéjan from 14:30. The A63 was returned to motorists late in the afternoon.

A10 blocked the toll on Virsac, north of Bordeaux

The largest exclusion point of Gironde is located north of Bordeaux, in the A10 between Saint-Aubain-de-Blaye and Saint-André-de-Cubzac. The yellow vests passed through the night and led this Sunday morning to a swamp of Vichac, north of Bordeaux. Around 10 am, the police stepped into the Virsac bus to restore traffic. But an hour later, about sixty yellow vests were returned to the site. Traffic is decreasing in both directions, between Saint-André-de-Cubzac and the toll bar, with many kilometers of congestion.

Late in the afternoon, the situation became tense when the police used lace gas grenades. Then he relaxed a few minutes later as the night fell. We also saw that the CRS threw the helmets on the ground and spoke with some protesters about the applause of the other young vests. Early in the evening, there were still many in the area with the intention of spending the night.

The motorway continues to be cut, so drivers have to make mandatory exits: exit 38 to Bordeaux, Blaye / Montendre and exit 39-b to Paris and Libourne / Saint-Antoine.

To make it worse, a filter bar was installed on the RN10 in Saint-André de Cubzac in both directions of the traffic.

The Aquitaine Bridge was evacuated in Bordeaux and then captured again

Another police intervention on the Aquitaine bridge in Bordeaux was closed from Saturday afternoon at the junction 4. If the traffic was restored on Sunday in the direction of Paris / Bordeaux, it took more time in the other direction because a filtering barrier that was just split. The bridge returned to motorists shortly after midday. Twelve protesters were arrested and detained to block the move.

But early in the afternoon, the yellow vests have invested again. First in the direction of Bordeaux – Paris then in the other direction. At 16.30, the bridge closed in the north-south direction and traffic is diverted from the François Mitterrand bridge. Again, it is not impossible for the yellow vests to decide to spend the night.

But early in the afternoon, the yellow vests have invested again. First in the direction of Bordeaux – Paris then in the other direction. At 16.30, the bridge closed in the north-south direction and traffic is diverted from the François Mitterrand bridge. And here it is not impossible for young vests to decide to spend the night.

Other acts also interrupted this Sunday's traffic at the Sauveterre de Guyenne, the Langon side of the A62, or the national 89 on the Arveyres toll.