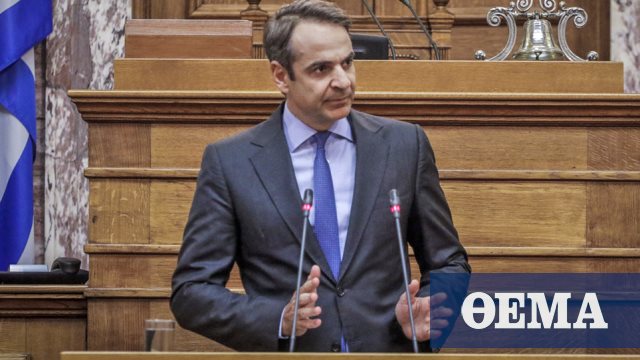 It is clear that ND will not vote for the Prespa agreement either now or after the election Kyriakos Mitsotakis appeared in his speech at the New Democracy Coalition.

He also called for national elections before the Prespa Agreement came to parliament, saying Alexis Tsipras had undertaken to pass the deal before the elections with temporary benefits.

Mr. Mitsotakis also referred to Nikos Kotzias' complaint, calling "the unprecedented justice to investigate each other's ministry categories." "Why is not the letter of the resignation of Kotzia and the minutes of the cabinet at issue published when they have been the subject of a judicial inquiry?" The chairman of the ND asked.

He also spoke of a government that Panos Kammenos is supporting "because there is a grammar on both sides", noting that while we wait for the Skopje agreement in the House to be ratified and "to see if Mr Kammenos will leave the door or From the window".

Regarding the economy, Mitsotakis said that Greece is retreating to all international organizations' ratings adding that "some inside and outside Greece have the audacity to claim things are going well they are the ones who wanted to celebrate the end of the Memorandum" .

He attacked Alexis Tsipras for having imposed a permanent memorandum and years of austerity talking about a game of benefits from the government in order to create engagements with groups that have led to this difficult position.

Mr. Mitsotakis also criticized the lawless environment by making special mention of universities, pointing out that "the government encourages the environment for the detention of students and teachers".

The ND president also spoke of an attempted manipulation of justice, "while the government itself is trying to prevent or postpone the public prosecution of the Eye to protect and protect people in the area of ​​self-government associated with it." He spoke, "a pogrom of political persecution from lame examining committees."

Kyriakos Mitsotakis continued on a high note on the occasion of the Thriasio affair and the sale of weapons in Saudi Arabia, "SYRIZA-ANEL, a scandal-controlled government, and every day the Greeks are increasingly aware of it".

"As soon as the end comes, we will learn even more about their dark transactions," added Mitsotakis.

The government makes the Constitution a "disorienting tool"

"They do not want Greece to go ahead or stay stagnant but to go back as they did to economy, education, security, everywhere," Mitsotakis said.

"We will not allow the Constitution to be criticized," said Kyriakos Mitsotakis.

The key points of the SW proposal

Mr. Mitsotakis also referred to the most basic points of the ND's proposal for constitutional revision, saying:

– Constitutional rules and mechanisms are in place to prevent fiscal derailment

– Taxes with a modest power will not be allowed

– strengthening of ASEP and constitutional establishment of evaluation at all levels

Finally, he clarified that ND is in no way willing to consent to an instrumental review that will keep the country captive in anachronistic structures. It is in the hands of the government to lift itself to the level of circumstances. If it does not, ND will not go back to its beginnings. "

The main differences of the SYRIZA-ND proposals

Piraeus has, in the meantime, codified the basic differences between its own proposals and SYRIZA.

SYRIZA:
Easing institutions.
Enforcing the simple analogy for the institutionalization of non-government.
Election of the President of the Republic with … 9 votes.

ND:
Stable Election Cycle.
Election of the President of the Republic by the citizens if not elected by the Parliament after two votes.

SYRIZA:
An obsession that keeps the country in the past.

ND:
Strengthening the autonomy of Public Universities.
Establishment of private universities.
Rationalization of environmental protection.
Policies to address the consequences of climate change.