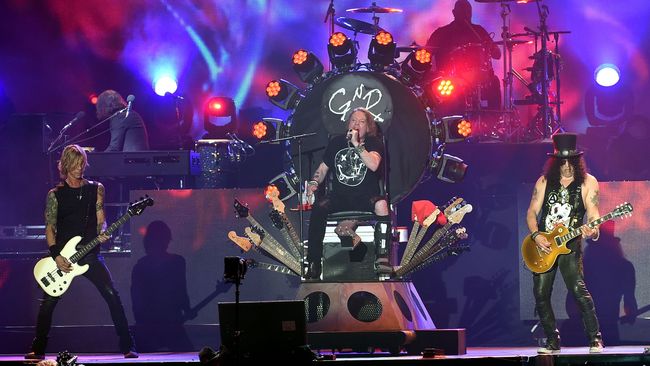 CNN Indonesia – Third-eye management agent Adib Hidayat said he had prepared the presence of President Joko Widodo (Jokowi) in the concert Guns N Roses on Thursday (8/11). But he could not confirm the presence of Jokowi.

"We do not know that all the possibilities can happen, the president comes or not, when we come we are very happy and we are prepared," Adib told a press conference at the Bung Karno central stadium on Tuesday (6/11).

Jokowi is known as a person who likes metal music and often comes to many Indonesian music festivals. Even this former mayor of Solo had attended Metallica and Iron Maiden concerts when he came to Indonesia.

Judas Priest also openly invited Indonesian number one to watch their concert in Indonesia on December 7th. They forwarded the invitation by sending a note to the @Jokowi account.

Megadeth also invited Jokowi via Twitter to come to JogjaROCkarta 2018. Unfortunately, Jokowi was unable to watch but greeted Megadeth through video playing on the big screen.

In addition, Adib said Guns N Roses's staff had arrived in Jakarta from 10:00 this morning. However, the team and the crew were also present to prepare the scene and lighting.

Guns N Roses Production, Ron Chamberlain said all staff were pleased to show up in Indonesia that came in "Not in this life …. They can not wait to sing for Indonesian fans.

"They will perform for three hours bringing songs from all the albums, you will not be disappointed," said Ron.

This concert tour also marked the appearance of the formation of Axl Rose, Slash and Duff McKagan ever since "Using Your Illusion Trip" in 1993. Ron stated that the three of them were happy to return to the music together.