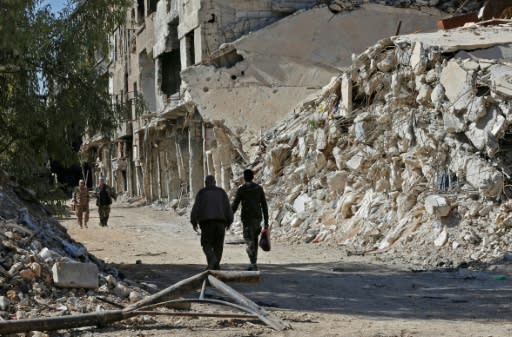 The Syrian authorities have set up a plan for the return of Palestinians to Yarmuk camp camp in southern Damascus, the deputy foreign minister said.

In an interview with Beirut's Al-Mayadeen broadcaster, Faisal al-Meqdad said there is a "plan to return all refugees to the camp", which hosts about 160,000 Palestinians before the Syrian War breaks out in 2011.

He did not specify how or when people would return.

The Syrian government and allied forces took over the neighborhood in May from the Islamic state group, pushing the jihad from their unique fortress in the capital.

"Efforts are being made to clean up the mines that remain … Daesh," said Meqdad, using an Arabic acronym for IS.

Founded in 1957 with scenes for Palestinians who fled or moved away from their homes with the founding of Israel, Yarmuk grew up in a busy neighborhood.

Those who have left have experienced serious food and drug shortages under a furious siege for many years.

EU psychedelics entered the region in 2015, causing further pain to the remaining residents until they were forced into May.

Five months later, only a few residents managed to return.

Mehad said that Damascus wanted to dismantle any "rumors" that the Palestinians had been displaced.

The once bustling district is now a ghost town full of ruins and steel rods.

The United Nations Organization for Palestine Refugees, UNRWA, said that 23 of its facilities in the camp, including 16 schools, have been damaged but will only be remedied if the government officially allowed residents to return.

UN and Palestinian officials have criticized Damascus for not giving the green light for reconstruction plans or officially allowing residents to return.

On Monday, Meckand said the Syrian government would not oppose "the role of the Palestinian Authority or UNRWA in rebuilding the camp."

More than 360,000 people were killed by the Syrian multi-dimensional war that erupted in 2011 with the violent crackdown on undemocratic protests.

People walk from the damaged buildings in the Palestinian refugee camp of Syria, Yarmuk, south Damascus, on November 1, 2018