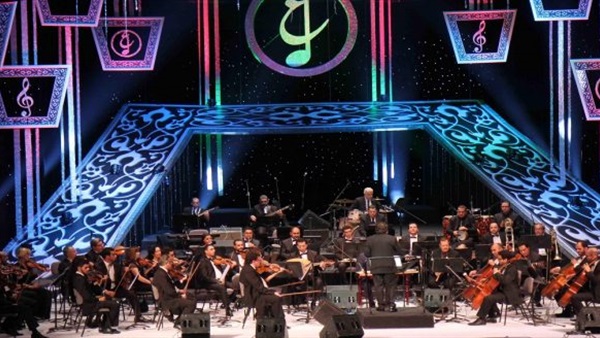 The Cairo concert kicked off at 7 pm in the exterior courtyard of the Opera House
From where she received the Center for the Development of Talents for Children and Young People, supervised by Dr. Abdul
Mr. Wahhab El Sayed, the pioneers of the opera and the festival with patriotic and patriotic songs
Events in the lobby of the Grand Theater where the Arab Takht played a group of the best works
Arabic music and then began the concert at the Grand Theater with his end-of-series music
Raafat El-Hagan performed the band led by Maestro Mustafa Mahmoud and then intensified
Singers Sabreen Alnjaili say in the sun, Odek.

Singer Yasser Soliman sings with rich people and Al Ramla. Here is a paragraph
The individual performance of oud player Mohsen Ibrahim, who played only the music of the traveler in the music
Mohammed Abdel Wahab and completed the first space of the wonderful planet of concert singer Rehab Omar
East Umm Kulthum Fikrouni and then prepare for the concert celebrating the Lebanese star Rami
Ayash, who was greeted by the audience with great reception and in the style of my national anthem
Ayyash is a song in which he presented a number of the best national and emotional songs
In the giants of Tarab along with many of his well-known songs, God is in you in Egypt, in
Place, Khalini Ma, Qadish was in the Fayrouz people, and from the net, on the contrary, tourists to Abdel Halim
Hafez, Sawa Balzreq, the people of Alraiqa, also presented a song titled My Mother accompanied by children and buds
The Egyptian Opera Talent Development Center with which the public comes in contact
A great and constant song by Ayash was telling Jani two days after the song and the Lebanese Amir
The nights "Hikaya Jaya", your love I, Lebanon Ya Sama Laouda El Safi, Gibran,
O my opener, the money of my heart, my congratulations and my conclusion with my national anthem that I did with him
The public.

On the stage of the Arabic Institute of Music, artist Ismail Sadiq gave a concert
Accompanied by the art group and the participation of singer Yahya Abdel Halim included a series of masterpieces of melody.

On the stage of the Republic, the Ministry of Youth and Sports Orchestra held a concert
A variety of heritage works, and within a large public rally celebrated the audience of the Alexandra star Medhat
Saleh on the occasion of his birthday, which coincides with the concert he performed at the Sayed Darwish Badar Theater
With the participation of pianist Amr Salim and accompanied by the Ensemble Hefni
The Arabic headed by Maestro Hisham Nabawi presented a collection of the most famous works besides
A collection of heritage songs is the Medley for the songs of the latest artist Farid Al Atrash,
Mtli in my heart costume what is her love, peace be upon him, dreams my heart, my heart, walks in his misfortune,
Planet Tani, Ze What you want, my lover, my lover, my daughter and my lover, the world if my life and my life
Of your creation. Preceded by a break for solo playing with Iraqi lawyer Furat Kadouri accompanied
His band made a selection of music of the years
The musical compositions of his own compositions turn Ishtar .. Nour eyes .. Tigris goodness ..
Pepper and Cemetary Hilal Eid .. Sweet of Iraqi Folklore .. Goodbye Guatemala.

The singer Marwa Naji gave a concert in which she sang a selection of
The works of the greatest singers in Egypt and in the Arab world are a tribute to popular folklore, if you are
Nasi, farewell and the life of your eyes, Jani said two days later and ended up at Marwa's first bright Splendor
Umm Kalthoum is hoping for my life .. for the first time.

Singer Mohammad Tharwat performs a concert at the theater in the center
Cultural Center in Tanta's Country accompanied by the Arabic music band Abdel Halim Noireh
Headed by Maestro Ahmed Amer Shady through a collection of his most famous works besides
Heritage songs preceded a break for the stars of Issam Mahmoud, Amira Ahmed, Rizvi Said and Mahmoud
Abdul Hamit.