Cîţu: Fitch's rating confirms the budget disaster and the collapse of the economy! 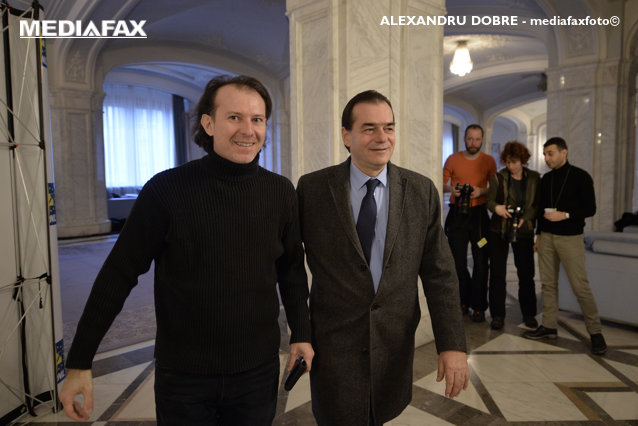 Liberal Senator Florin Citu claims in a post on his Facebook page that Fitch Ratings' announcement on Friday shows the collapse of the economy and Finance Minister Eugen Teodorovici will have to step down. Cîţu: Fitch's rating confirms the budget disaster and the collapse of the economy!

"Fitch's rating confirms budget destruction and the collapse of the economy!", writes PNL Senator Florin Cîţu on Facebook's Facebook page on Saturday. In this position, the Senator paralleled Fitch's press release on Friday night and the press release issued by the Treasury on Saturday.

In particular, in the above quote, the agency's consultants write: "Fitch does not believe that this can continue and expects the Romanian budget deficit to reach 3.4% of GDP in 2018 and 3.6% in 2019 This is in contradiction with the target of the budget deficit of 2,96% of GDP for 2018 ".

The Liberal Senator also claims that the Finance Minister is not saying in the press release on Saturday that the organization confirms the slowdown in Romania's economic growth this year.

In particular, Fitch's advisors say in the above-mentioned sentence: "Therefore, the agency has kept its real GDP forecasts unchanged, forecasting an increase of 3.8% in 2018 and 3.3% in 2019".

Phileleftheros also commented that the Minister of Finance does not say that: – Romania's rating is the same in 2012. "The economy has not improved in Fitch's vision these years." – Romania's rating is the lowest in the "Lower grade grade" category and immediately above the non-profit non-profit titles. "That is, for 6 years, Romania has not managed to escape the speculative and dangerous area for investors." – In January 2008, Romania had the same rating as at that time. In a few months, Romania suffers from a financial crisis. – Countries with the same rating as Romania: Indonesia, Morocco, Turkey.

"These are things that Dragnea and the gang will not tell them about today's Fitch announcement," says Citu.

Under these circumstances, the PNL Senator publicly asks the so-called Minister of Public Finance: "1. present the message of the entire rating agency on the MFP website; 2. provide the assessment history to this organization; 3. show the relationship between the evaluation and the probability of a crisis in the coming months. If he can not figure out the chance I will help him. # 2020RomaniaFaraPSDsiALDE #FaraCompromisuri, "concludes Florin Cîtu.

Rating agency Fitch Ratings announced on Friday night that it maintains Romania's long-term credit rating at BBB- with a steady outlook, but warns that public finances have been weakened by the relaxation of fiscal policy since 2016.

The maintenance of the rating was due to the containment of government debt and GDP per capita and human development indicators, which exceeded the levels of BBB countries. These ratios are offset by deficits, current and government deficits and net external debt, which is higher than the other BBB countries, and pro-cyclical fiscal policy that is a risk to the macroeconomic stability of fiscal policy.

"The Fitch Ratings announcement represents a new recognition that Romania enjoys sustainable economic growth, which will help to boost investors' confidence in our country's economy and its strong growth prospects," said Eugen Teodorovici, , on Saturday, in a press release.

The rating agency underlines the reduction in the risk of overheating of the economy and forecasts for the year 2018 for real GDP growth of 3.5% and for 2019 and 2020 respectively 3.2% and 3% respectively in the light of the slowdown economic growth in the European Union and stricter monetary policy, as well as a reduction in tax incentives.

However, the main factors that may aggravate Romania's rating are the persistently high fiscal deficits that can rapidly increase the share of government debt in GDP and the overheating of the economy or the forced landing that affects macrostability .

The content of www.mediafax.ro is for your personal information and use only. They are is prohibited republish the content of this site without agreement from MEDIAFAX. To obtain this agreement, please contact us at [email protected]